RIP LOTUS if your in Sydney please attend this gig!! 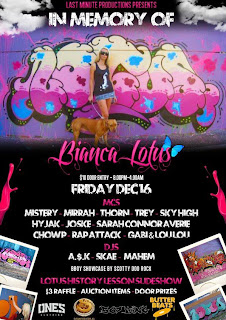 Bianca aka Lotus was a Sydney graff legend., She was tough street wise and had a wicked sense of humour. I painted with her a few times and she was nice enough to let me crash in her spare room years back when I was partying in Sydney. I spent the whole weekend getting free weed and drawing outlines for friends like her cousin ZOMBIE.

LOTUS and I did a street piece with FEAR DS just round the corner from Sydney Central Train Station that was featured in an article on Lotus in Blitzkrieg #6.

The Memorial was organised by MC Thorn and it will be on the 16th of December 2011. Details are on the flyer.